What Are the Perks of Owning a Desktop Marijuana Vaporizer?

When you are all set up with friends and want to share a special occasion, maybe you’d think to try and share your last gram of cannabis. But what would happen if, at the moment you prepared yourself to set your joint together, it fell and spread out into the air, landing in your carpet amidst tiny little bits of dust and dirt? Then, your honest intentions would have been for naught as your cannabis now is gone! Yet, you could have prevented this by owning a desktop marijuana vaporizer.

Now, the vaping industry is an entire world in itself. But some of it has grown into the marijuana industry, and it has continued to become one of the favorite modern ways to consume cannabis. And, considering the scenario described before, it might be one of the most effective as well. All things considered, desktop vaporizers are notably larger than handheld vapes. Nonetheless, desktop versions of this device have several benefits, mainly because of their size. High-end units make the most out of this. Since the units are very strong and dense, it means that a single fall won’t cause too much damage. Furthermore, the chances of a desktop vaporizer falling are very slim, since they are designed to stand on a table.

The resale value of the unit is another major factor that demands considerable attention, as it is one of the key reasons why purchasing a desktop marijuana vaporizer is worth it. If, for instance, you owned a handheld vaporizer over the course of a year and have grown weary of it, you could choose this option. There are many web portals and resale sites to sell devices such as this. When buyers search for a handheld vaporizer on the Internet, they usually purchase it for less than the smallest gas tank’s dollar worth.

Why Desktop Marijuana Vaporizers Are Superior to Handheld Ones?

Handheld objects are possibly the easiest to misplace. Whether it be cell phones, car keys, or even your wallet, they are very easily mistaken for other objects or belongings, forgotten somewhere, or simply vanishing altogether. On the other hand, your desktop vaporizer is likely to remain on your table at all times. It is both discreet enough to pass for a lamp and weighty enough to be noticeable. Since handheld vapes are often misplaced and lost, desktop vaporizers are inherently better devices. 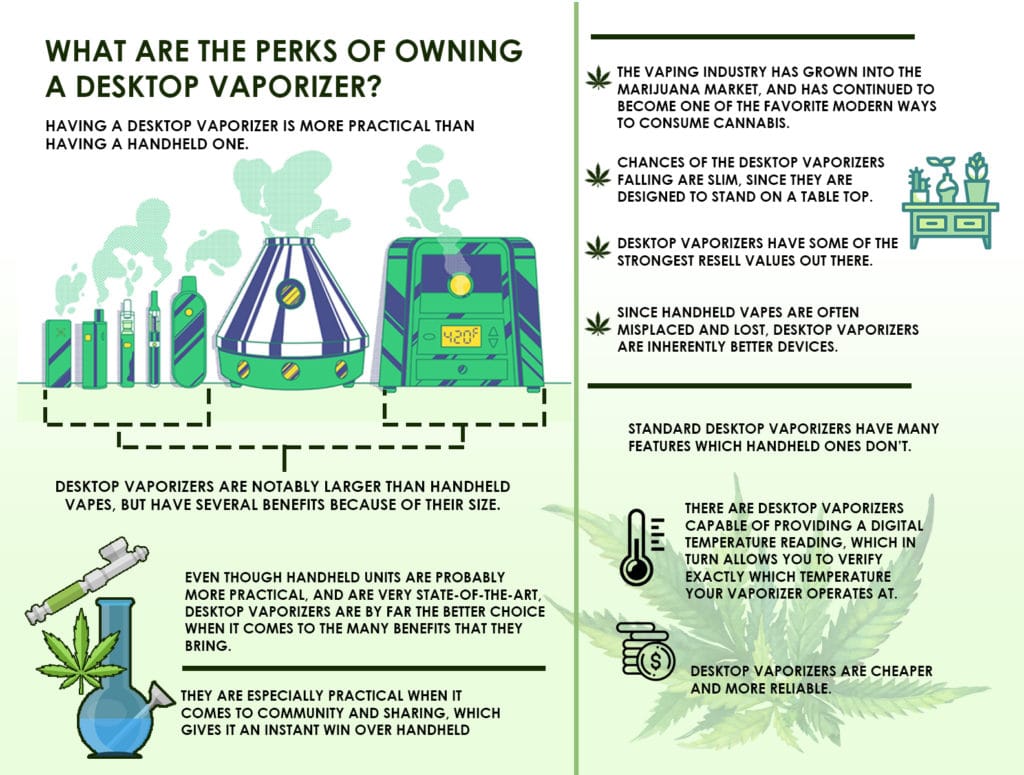 And They’re Very Easy to Handle!

So, thinking back on the dreadful scenario that we laid out at the beginning, we finally understand why a desktop vaporizer is the best choice when friends are over. It will also come in handy when it comes to getting your group to feel the effects you enjoy the most out of cannabis. In fairness, handheld vaporizers can do wonders in a group setting as well. But, given the chance that you have a desktop vaporizer with you, chances are that you will accelerate the consumption process and it will help you and your friends get much more out of the enjoyment. Units with the option to blow up balloons also come in handy, especially when it comes to vaping with a large group, since a lot of people will get a toke full of flavor without making too big of an effort. In this scenario, bowls also tend to last longer and provide a longer time for socializing with friends, instead of having to pack all the bowls constantly.

Even though handheld units are probably more practical and are very state-of-the-art, desktop vaporizers are by far the best choice when you consider the benefits that they bring. In economic terms, it’s cheaper in comparison to the cost of a single handheld unit. But desktop vaporizers are also more reliable devices. They are especially practical when it comes to community and sharing, which gives it an instant win over handheld units. Handheld vapes might be the best choice for personal and individual use, but they are comparatively more expensive, and there is always the risk that they get stolen. With desktop vaporizers, not only are these risks are no longer there, but they also have plenty of more distinctive features.

« Cannabis Strains to Fight the Side Effects of Chemotherapy
Why Bag Appeal May Not Be Important When Buying Cannabis? »
Pickup Location