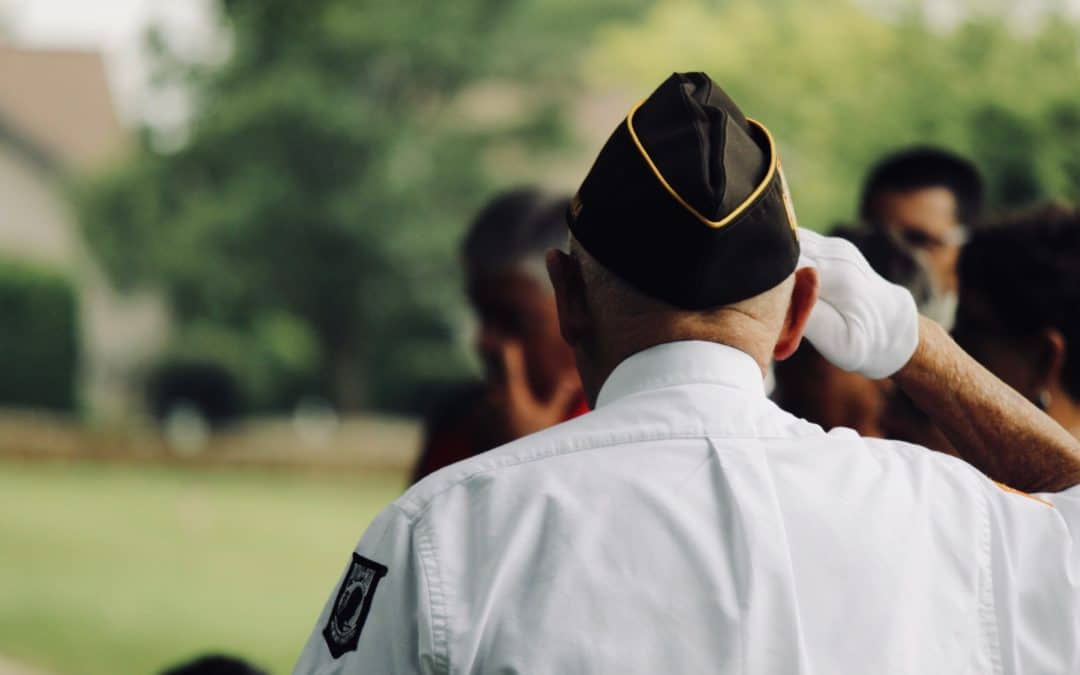 How Cannabis Can Help PTSD Veterans

Nowadays, cannabis users are growing more and more aware of its many benefits and relaxing properties. Whether it’s recreational or medical marijuana use, cannabis is often chosen over pharmaceutical drugs as the main treatment for anxiety. In one of the most impressive and fast-growing cannabis tendencies, it is often used to alleviate veterans suffering from Post-Traumatic Stress Disorder.

Veterans seem more willing to use cannabis in order to cope with the symptoms of PTSD instead of more traditional opiates and chemical antidepressants. And given its many calming effects on the body, this shouldn’t come off as a surprise. However, the Department of Veterans Affairs still hasn’t acknowledged this rapidly growing trend. Furthermore, it is also unwilling to prescribe it as a viable treatment.

What Do We Know About Cannabis Use by Veterans?

The statistical data falls short when it comes to figuring out exactly how cannabis is potentially better than pharmaceutical drugs as a treatment for PTSD. There simply isn’t a lot of information available to either prove or disprove how effective cannabis is in treating mental health disorders. Although several studies have been made, and research on the subject is constant, experts seem to agree that the available data is not conclusive.

Federal law classifies marijuana as a Schedule I drug, next to other illegal substances, such as heroin. This prevents researchers and scientists from carrying out in-depth studies in order to asses the medical benefits of marijuana. While federal law allows certain controlled pharmaceutical studies, these are often disregarded by the Department of Veterans Affairs, in favor of more traditional remedies. And this tends to be the case when it comes to both mental health disorders and physical chronic pain.

And yet, most veterans suffering from PTSD have continuously used cannabis as part of their treatment. The Department’s indifference over this fact has not prevented it from increasing. Approximately 30% of all war veterans in the United States suffer from Post-Traumatic Stress Disorder, which goes to show how many of all veterans are keen to use medical marijuana.

Some veterans experiencing PTSD who use medical marijuana have taken it upon themselves to increase awareness of the subject. They see the lack of visibility from the Department of Veterans Affairs as a care gap. Some even have chosen to start businesses focusing on the treatment of other patients through cannabis. The problem with these initiatives is that they can only function in the local jurisdiction of certain states – the ones that allow the medical and recreational use of cannabis. As a result, their action is limited and is often overshadowed by the VA.

How Does Cannabis Aid Recovery?

Some veterans develop PTSD during their experiences in combat, but the rest of them tended to see the symptoms show up afterward.  Those who develop PTSD are often prescribed a great dose of pharmaceuticals drugs as a treatment for chronic pain and Post-Traumatic Stress Disorder. However, many of them report feeling dissatisfied with the effects of these drugs. Instead of alleviating physical and mental distress, the drugs often just repress them. This leads most veterans to use cannabis as a substitute for drugs when it comes to coping with pain and PTSD. Veterans who look forward to using medical marijuana as a treatment for PTSD find that certain strains work best for them, like strains with high THC substance and strong terpene doses. They are also very fond of rich flavors and aromas in their cannabis strains.

Although veterans use cannabis to cope with PTSD, they may have also used it in combat. Marijuana had relaxing effects on them during these experiences as well. Veterans who used cannabis reported that smoking marijuana made them capable of overcoming their difficulties during deployment and made it easier to collaborate with their brothers-in-arms. 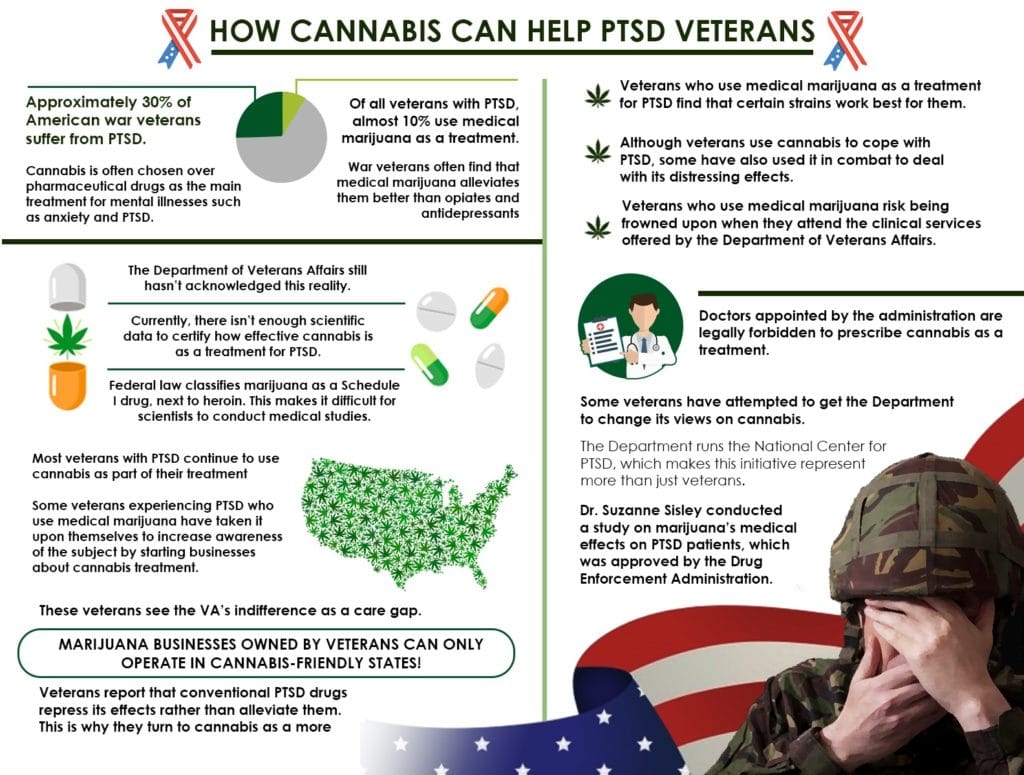 Is it Difficult to Acquire Cannabis?

Given that the Department for Veterans Affairs is regulated by federal law, veterans who use cannabis might be looked down upon. As a result, veterans who attend the Department’s clinical services may choose to withhold or outright deny the use of cannabis from their doctors and providers. Doctors appointed by the administration are legally forbidden to prescribe cannabis as a treatment. They cannot assist patients with paperwork from state programs either. Nonetheless, the Department states that it will never deny the veterans any clinical benefits due to their choice of using medical marijuana.

Doctors who work hand-in-hand with these companies have devoted themselves to the task of conducting further research on the effects of cannabis in PTSD patients. The goal is to make the Department for Veterans Affairs change its view on cannabis. Since the Department runs the National Center for PTSD, the initiative involves more than just combat veterans. A major study on the subject that is worth mentioning is the one carried out by Dr. Suzanne Sisley. In her study, a clinical trial treating PTSD in veterans with marijuana was conducted. The study was the first ever to be approved by the Drug Enforcement Administration, as well as several other important agencies on the matter. In one of the most recent polls related to medical marijuana, almost 10% of all veterans reported using cannabis. The statistics increase predominantly in states where cannabis is legal, with over 40% attesting to using it.

There are many organizations founded by veterans that aim at increasing the awareness on the medical benefits of cannabis. One of them is the Veterans Cannabis Project, which advocates for the more than 8% of veterans who publicly consume cannabis, as well as the 80% who support programs involving medical marijuana use. This organization seeks to get the Department of Veterans Affairs to adopt cannabis as a regular medicine and to distribute it accordingly. Although this initiative is potentially groundbreaking, it relies entirely on anecdotal evidence from the accounts of veterans who use medical marijuana due to the lack of scientific data available.

As with any other medical treatment, patients respond differently to the prescribed medication. It doesn’t matter whether it’s a physical or mental disease. When it comes to some patients experiencing PTSD, cannabis might turn out to be the best option available. As of today, it remains a mystery how the Department of Veterans Affairs will acknowledge this. There is still hope, however, that cannabis will end up incorporated as one of the VA’s predominant treatments.

« Cannabis Hangovers: Can They Happen?
Can Cannabis Help to Alleviate Stress? »
Pickup Location
We use cookies on our website to give you the most relevant experience by remembering your preferences and repeat visits. By clicking “Accept”, you consent to the use of ALL the cookies.
Do not sell my personal information.
Cookie SettingsAccept
Manage consent