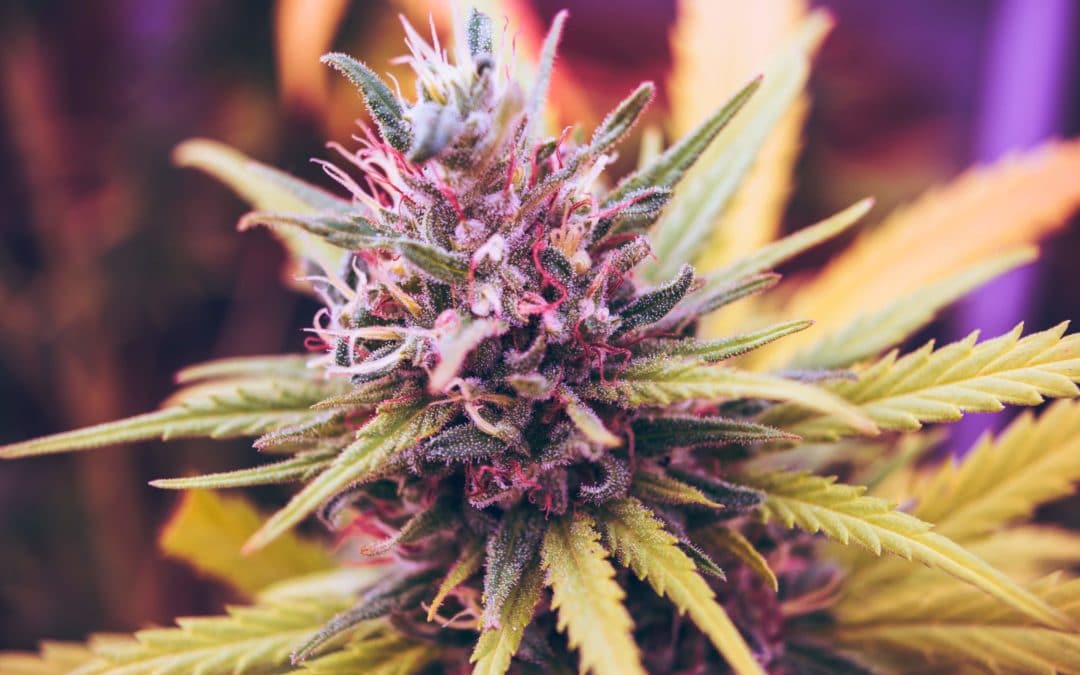 Medical cannabis is delivering more and more breakthroughs every year. We can see this in the great number of health patients seeking medical treatment through cannabis. Whenever they are suffering from conditions such as chronic pain, Irritable Bowel Syndrome, or Crohn’s disease, patients often go to cannabis as an effective medical reliever. It makes sense that patients suffering from breast cancer would also seek out cannabis medical treats.

The American Cancer Society considers breast cancer to be the most abundant cancer type in women all across the United States. This goes to show how prevalent and worrying is this disease when pondering how cannabis could help patients. The only major exception to breast cancer is skin cancer, which happens to be more common in certain parts of the country. However, studies reveal that women have a 13% chance of developing breast cancer at some point in their life. Because of this, breast cancer is every bit as possible as it is dangerous.

Most people don’t know this, but men can also develop breast cancer at some point. It is pretty uncommon, though there are documented cases of male breast cancer patients, and they continue to appear every year. In 2019 alone, almost 270,000 women and over 2,000 men have been diagnosed with invasive breast cancer. Doctors and professionals from the cannabis industry agree that medical cannabis can be a practical and affordable solution for most breast cancer patients. Studies and anecdotal evidence show that cannabis helps patients cope with symptoms, and especially with the harsh effects brought by chemotherapy.

All things considered, how likely is it that breast cancer can be properly treated with medical cannabis? Let’s look at the facts one by one, to see if this is possible. 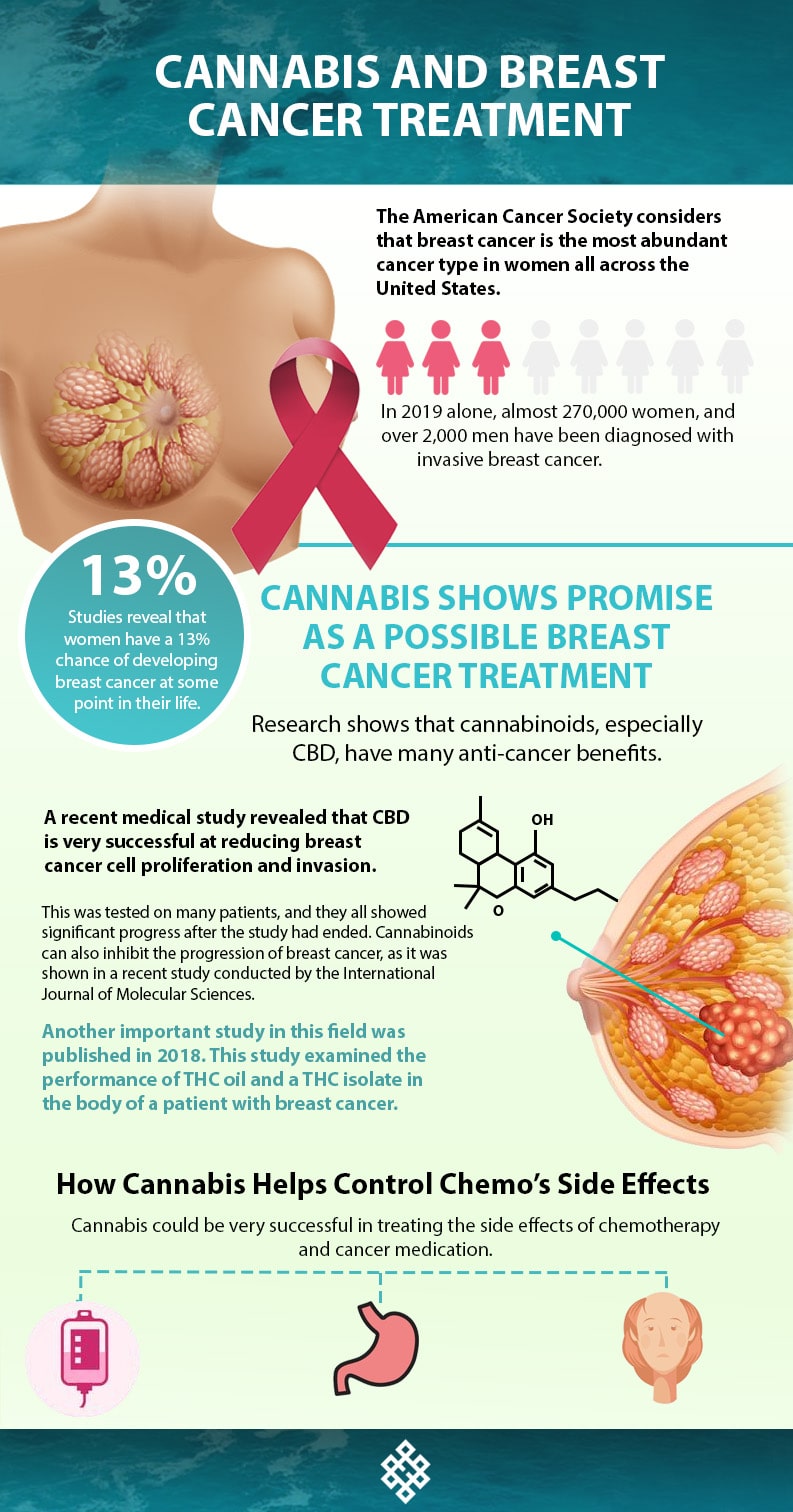 Even though there aren’t many studies when it comes to what medical cannabis can do for all patients, doctors are confident that it can work as an effective treatment for breast cancer. Patients all over the world have come to love cannabis as an effective means to put down the most unpleasant effects of cancer. Research shows that cannabinoids, especially CBD, have many anti-cancer benefits. In some cases, cannabis treatment has even managed to slow down the growth of tumors.

A recent medical study revealed that CBD is very successful at reducing breast cancer cell proliferation and invasion. This was tested on many patients, and they all showed significant progress after the study had ended. Cannabinoids can also inhibit the progression of breast cancer, as it was shown in a recent study conducted by the International Journal of Molecular Sciences.

Another important study in this field was published in 2018. This study examined the performance of THC oil and a THC isolate in the body of a patient with breast cancer. The study itself was aiming at examining the combined effects of a full-spectrum THC oil, as well as a THC isolate, along with standard chemotherapy medications. This study was somewhat of a breakthrough, given that it showed that THC could also counteract tumors as much as CBD. However, when it comes to specific breast cancer subtypes, both substances behaved differently. The study revealed that the full-

spectrum oil performed a lot better than the THC isolate for as many as three breast cancer subtypes.

It’s possible cannabis helps patients suffering from breast cancer through the Entourage Effect. During this process, many cannabis components work together in a synergistic interaction, which results in massive chemical effectiveness that often soothes medical patients. Among the cannabis components that interact as part of the Entourage Effect are cannabinoids, terpenes, and flavonoids. Each of these performs a specific function during this process and should be regarded separately. However, their individual performance is not as good as the Entourage Effect, which is why the latter is so important. Cannabinoids and flavonoids can successfully relieve patients of their symptoms, while terpenes deliver the pleasant tasty sensation that is often likened to cannabis.

Terpenes are among the most relieving components that can be found within cannabis. They have many anticancer and antitumoral properties, which is why doctors and professionals from the cannabis industry favor them so much. They may be the most significant of all substances interacting during the Entourage Effect, according to a British study published in 2014. This study revealed that the Entourage Effect highlighted the effectiveness of antitumoral components.

The American Cancer Society recommends that patients struggling with the side effects of chemotherapy give cannabis a try. For patients who also experience loss of appetite and neuropathic pain, cannabis could also be a very effective painkiller. If the patient is also struggling with low self-esteem, they may also be treated to the uplifting effects cannabis brings.

Recently, The New York Times published an article detailing the life story of a woman who was diagnosed with breast cancer. She started her chemo with taxane, which is well-known for its vast array of unpleasant side effects. The patient began to lose the ability to feel anything on her lower limbs. She also developed tinnitus as part of the side effects of her chemotherapy. Eventually, she was unable to bear all of chemotherapy’s side effects, which is why she quit and gave CBD a try. This is how she managed to lower her symptoms to the minimum. After just a few weeks, she saw that all of her pain and nausea had gone away.

Her progress allowed this patient to carry on her daily activities as if nothing had happened. Thanks to this recovery made possible by CBD, she was able to complete her chemo with decreased side effects. Another important breast cancer patient who has successfully recovered from chemo’s side effects thanks to cannabis is actress Olivia Newton-John. She has been diagnosed with breast cancer many times throughout her life. However, cannabis treatment has aided her overcome the most difficult symptoms from this condition.

« What Are Cannabis Flavonoids?
How Does CBD Work? »
Pickup Location