*Or 18+ with a valid medical recommendation.
I'm old enough No
What Is CBDA And How Does It Work? | Haven 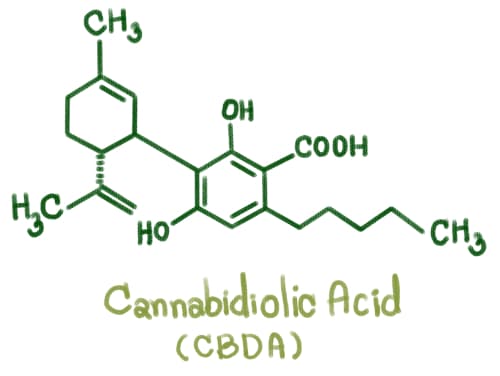 What Is CBDA And How Does It Work?

For as long as the cannabis industry has existed, compounds have been and continue to be one of the most fascinating topics. Most users, especially those who rely on medical cannabis to treat certain health conditions, consider compounds to be the most important factor when getting their feed. The most popular and groundbreaking cannabis compounds are called cannabinoids like CBDA. These substances interact with our organism in a synergistic way, which results in having important health and recreational effects. Most patients suffering from ailing health conditions can get major relief from a specific form of cannabinoid. Even conditions as varied as depression, stress, and euphoria can be successfully treated with the help of cannabinoids.

There is, however, one specific cannabinoid compound that is very interesting and rarely gets discussed: Cannabidiolic Acid, or CBDA for short.

As it happens with CBD and other compounds, CBDA is produced by cannabis and hemp, which means it is essentially a very natural substance. Live plants with the presence of CBD usually have plenty of CBDA that is completely organically produced. When exposed to heat, it converts to cannabidiol, which we usually call by the acronym CBD. By now, you’re probably familiar with what CBD and THC do and how they positively impact the body of the person who consumes it. Both of these substances, however, are distilled from the main cannabinoid form, which is called Cannabigerolic Acid, or CBGA.

It is possible to get CBGA to transform into three cannabinoid compounds, which can then be used to obtain more popular formulas like THC and CBD. This can be achieved by activating specific plant enzymes to make a synthesis out of the raw form. This way, CBGA can be turned into THCA, CBCA, and CBDA, the latter of which can be considered the raw form of CBD.

Taking CBDA, for example, we can expose the cannabis plant to sunlight and submit it to a decarboxylation process. This is the way CBD is born.

However, not everyone gets their fix exclusively on CBD. Many customers from the cannabis industry consider that the benefits associated with this compound are more effective when taken in the raw form. This is why CBDA-based topicals, tinctures, and capsules are common, and can often be seen as a popular niche for purist consumers.

All things considered, let’s see for ourselves how works its magic.

When it comes to how cannabinoids work, most of them simply bind to receptors, specifically CB1 and CB2. However, CBDA doesn’t exactly do that. What this raw formula does is prevent the production of the COX-2 enzyme as it merges with the endocannabinoid system. The COX-2 are enzymes which can produce inflammation within the organism after suffering an infection or injury. This way, CBDA can potentially help a patient under risk of becoming inflamed on a preemptive way by blocking COX-2 enzymes. Considering that this method actually diminishes the health risk associated with pain and inflammation before it even happens, CBDA might be a more effective medical solution than CBD.

At least one study has hinted that CBDA use as a standard solution could have a downside to it. This study, which used rodent test subjects, revealed that CBDA lowered the production of serotonin, which is a chemical substance produced at the neurological level that is basic to human life. Not only does serotonin play a vital role in connections between cells, but it is also key to daily processes such as emotional function, digestion, sleeping, walking, and eating.

However, even this apparent fault in CBDA’s effects can also be turned into a major medical advantage. One good reason for this is that excess serotonin can trigger many unpleasant health conditions, such as vomiting and constant nausea. This is particularly common in cancer patients since chemo and radiation tests can cause the body to produce serotonin in unnatural quantities. Patients who have been through this can find a way to cope with vomiting through medication; however, they often claim that the continuous sensation of nausea is far more distressful and discomforting. It may even be so unpleasant that some cancer patients would rather discontinue their treatment in order to avoid this horrible feeling. This is where CBDA can bring a major benefit: not only can it relieve cancer patients of any other stressful conditions, but it will certainly lower their excess serotonin levels.

In order to know for certain all the potential health effects CBDA brings, more studies will have to be conducted. However, what data shows so far is that CBDA can indeed affect the 5HT receptors that produce serotonin. Thus, it’s possible that CBDA becomes a standard medication for treating nausea induced by chemotherapy.

Although most of the cannabis industry isn’t nearly as old as that, scientists and experts have been attempting to uncover all of CBDA’s effects for at least a decade. Back in 2008, scientists examined if CBDA would work as an anti-inflammatory substance by running a study where they tested its ability to prevent COX-2 from forming.

During this study, researchers looked at CBDA’s molecular structure comparatively with that of NSAID drugs, which are often used to treat inflammation. This examination revealed that their chemical structures were almost alike since NSAID drugs can also inhibit COX-2 receptors. This evidence suggests that CBDA could probably become a standard anti-inflammatory agent in the near future.

However, not all of CBDA’s potential benefits are limited to anti-inflammatory properties. According to scientific data, it might also be a thorough anticonvulsant agent. When compared to how CBD holds back 5-HT receptors, CBDA has 100 times more accuracy, which is partly due to its bioavailability. Thus, the organism metabolizes the CBDA as it would any natural substance: faster and in an easier way.

CBDA’s receptor affinity opens the door for other health-related possibilities. For example, it could be instrumental in helping patients suffering from depression. The way CBDA impacts 5-HT receptors and serotonin release is relatively similar to how an antidepressant works, which is as a selective serotonin reuptake inhibitor, or SSRI.

All things considered, CBDA is bound to be a major cannabinoid form with groundbreaking results in the medical cannabis area.

« How Does Cannabis Affect The Way You Dream?
What Factors Influence A Cannabis High? (Part 1) »
Order Delivery Order Pickup